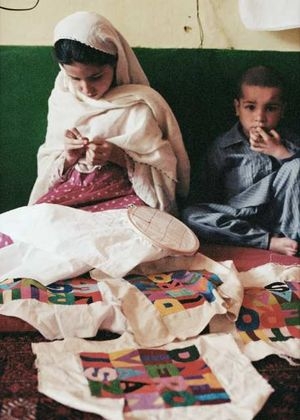 An Afghan girl stitches a small embroidered piece in a refugee camp in  Peshawar, Pakistan

Alighiero Boetti’s (Italian, 1940-1994) embroidered Arazzi are among the most intensely eye-catching of all Conceptual art. They were created from 1971 to 1994 by Afghan craftswomen. Boetti arrived in Afghanistan, to where he travelled extensively, in 1971 and loved to spend time in Kabul, where he also opened the ‘One Hotel’ with his friend Gholam Dastaghir. After the Soviet invasion in 1979, Boetti was no longer able to enter the country but continued his work with Afghan women who lived as refugees in Peshawar, Pakistan. The craftswomen worked according to the artist’s designs, but used their traditional technique and were free to decide the chromatic combination according to their sophisticated sense of colour.

We present three embroidered panels in this viewing room, with the titles Fuso ma non confuso (Fused but not confused) I fregi e gli sfregi (The Friezes and Scars) and Dall'oggi al domani (Overnight) showing Boetti's evocative and playful use of words and phrases to fit into his structured designs. The viewer must decipher the grids of text in the unconventional style of top to bottom, left column to right. By breaking down text into its letter parts, Boetti exposes language as sophisticated but ultimately artificial arrangement of forms. 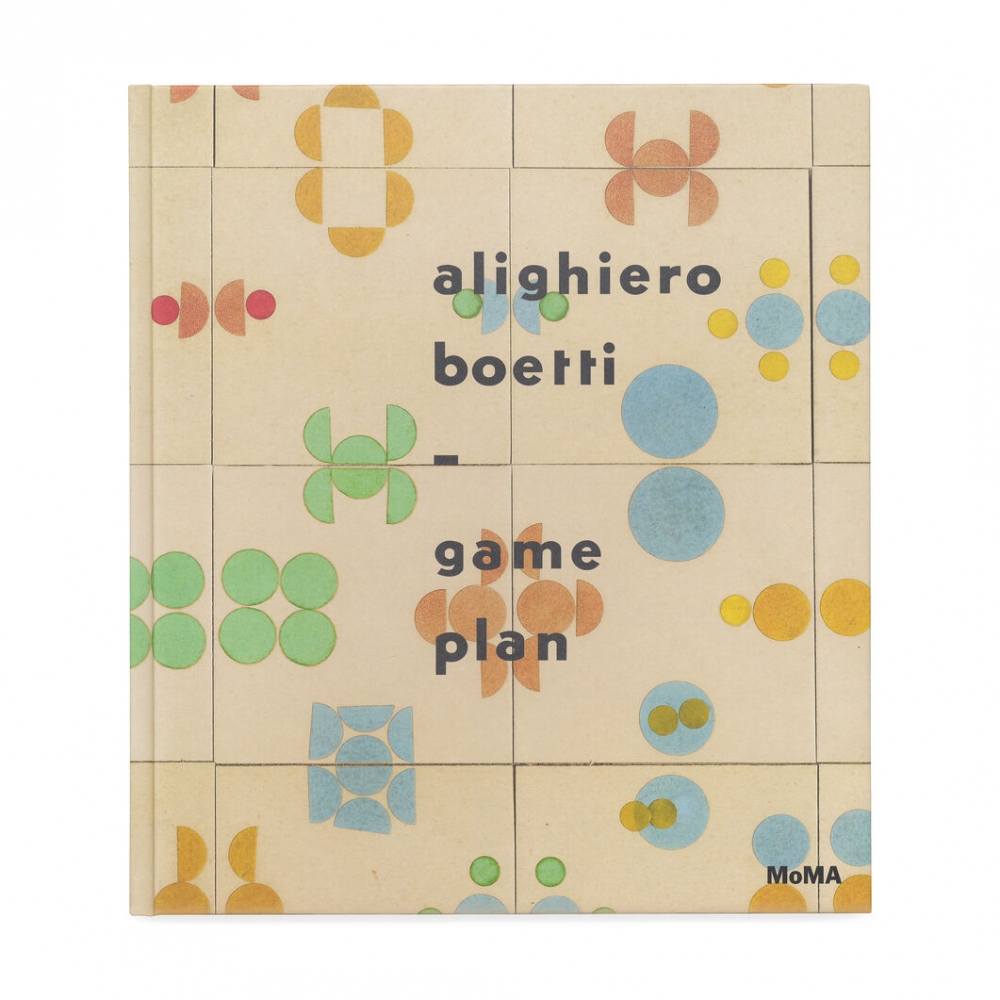 Excerpt from the Essay Giving Time to Time by Mark Godfrey, TATE ETC, 2019

With his associate Gholam Dastagir, he launched the legendary One Hotel in 1972, which became a place where he could hang out with other travellers on subsequent visits, while organising his production there. He tended to work with intermediaries, who would commission the women embroiderers. It sounds at first like a problematic way of producing art – using local labour and craft techniques to make works for a Western market – but Boetti’s approach was much more nuanced. Fascinated by the new approaches to colour in Afghan culture, he encouraged the producers to make their own decisions as they embroidered his word squares or maps. They became co-producers rather than fabricators, and their voices were present in the works, usually in bands of embroidered farsi text around the edges. Boetti had to stop going to Afghanistan after the Soviet invasion in 1979, but continued to work with communities of exiled Afghans in the northern cities of Pakistan. Around 1989 he visited Peshawar and met representatives of the mujahideen battling the Soviets. Their jihadi messages of resistance would be integrated into the large word squares and around the borders of the maps of this period. This alone is extraordinary: that his work would become a site where a political voice could be articulated – but not his own. Boetti was always on the lookout for 16- or 25-letter phrases that could fit into his word squares, but the most important phrase to enter his art was ‘Mettere al mondo il mondo’ (Putting the world into the world), which occurs in a group of biro drawings from the 1970s, encoded as a series of blank white commas like islands against an ocean of blue ink. This was a kind of guiding principle for his approach: the artist should not invent things, but instead bring those things that already exist in the world into the world of their work – stamps, magazine covers, office diaries, information about rivers. The phrase also suggests that artists could introduce things from all over the world into their work: Boetti used mosaics, kilims, embroideries, Japanese calligraphy. Through approaching art like this, the artist would ‘give birth to the world’, but never through wild flights of their imagination.

Marie Hazard (French, b. 1994) weaves to create her personal canvas and tell a story – her own and that of her time. The etymological origins of the French word tisser (to weave) highlight the significance of this traditional act, deriving from the Latin texere (to write). By choosing weaving as a medium, Marie Hazard is telling the story of a technique, of savoir-faire, of an ancestral artisanal production which she adapts to our present time. For Hazard, weaving is writing, weaving is telling, weaving is inventing a language. By breaking text down into its constituent parts, each artist’s work exposes language to be a sophisticated but ultimately artificial arrangement of forms.

This exhibition showed Boetti and Hazard side by side, showing how each artist’s work exposes language to be a sophisticated but ultimately artificial arrangement of forms.